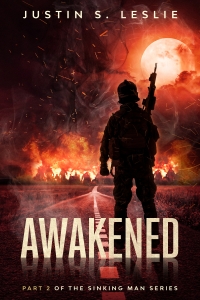 “Where was he last spotted?” Kim asked as I shook my head.

“How am I supposed to know that?” I responded as she let out a breath pulling out her cell phone.

Kim finally joined us after Petro and I completed our Christmas shopping. We had done our best to hide the gifts out of sight. Casey had decided to let Petro go solo on this mission, having what she described as present wrapping issues.

“You know that Santa tracker NORAD has. The one on TV everyone uses to get their kids in bed. Well…, there’s a little more to it,” she started as I held my hands up, slapping them back down on Cadi’s steering wheel only to garner an unapproving beep.

“Spill it. This is a new one out of all the weird shit I’ve seen.”

“No one’s told you about Saint Nicholas? Santa Clause, Kris Kringle, or as the Russians rightfully call him, Ded Moroz, meaning in Russian Grandfather Frost?”

Grandfather Frost perked Petro’s ears. “You mean the scary hunter that comes and disappears bad Mages and Fae?”” Petro gulped. “Plus, naughty Pixies? You know we’re all sort of naughty.”

“That’s the one. Last year when you were busy in that little room of yours,” Kim started talking about my time in the Postern. “I was briefed on Santa and his affliction for taking out mages and other things.”

“That’s what you were doing in Orlando?” I asked as she nodded.

“Oh yeah. He apparently thought Mickey Mouse was an evil hamster shifter or something along those lines and tried to take out the entirety of Disney land after the crowd left and it shut down. He shows up all big and mean-looking and asks for the big-eared one to come out and fight. Craziest shit I ever saw after watching the CCTV feed. We got there a few minutes later.”

Petro and I both stared slack-jawed at Kim. Cadi was also in on the conversation, having turned the engine off to also listen.

“I mean, he’s not wrong,” I guffawed, only to see Kim shake her head.

“It took an entire team of marshals and lord knows how many Mages just to get him to calm down. Remember when the park was shut down after Christmas last year? He sort of started wrecking the place.”

“So what happened?” I asked quickly, knowing she was leaving out the details.

“We finally got one of our own in the costume and convinced him it's all make-believe.”

“He tapped his nose and asked about California, insisting this isn’t over and the true Mickey was not what we thought. Suddenly about two hundred of Santa’s little helpers show up, and all hell breaks loose again as he takes off on an honest to god sleigh. If I ever see another one of those little shits…”

My often times tiny brain was trying to compute what I was hearing. “And you’re just now telling me this?”

“You seemed busy…., as always,” she trailed off.

“Anyway, he showed up in California a few minutes later. We were able to tip them off. After that, I’m not sure what happened. What I do know is that he hunts from Christmas day through the first week or so of January.”

“Cadi, how did you know he’s coming here? Or why?” I asked as we all hmphed at the question.

The radio dial scratched and squalled as it finally landed on Fire Starter by the Prodigy. It was a mid to late-nineties techno trap band before its time.

“I need to get something from the Atheneum. Cadi, it’s go time!” I stated as the car sprang to life, lurching into the air.