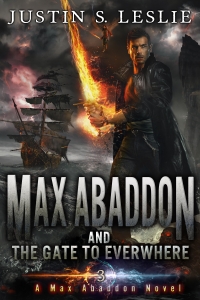 Max Abaddon and The Gate to Everwhere: A Max Abaddon Urban Fantasy Novel

Max Abaddon and The The Dark Carnival: A Max Abaddon Urban Fantasy Novel

This time The Dark Carnival is coming to town, and with it, an odd collection of Ethereals and Mages. With Planes Drifter headlining the first co-regular/Mage music festival, things of course don’t go as planned. At least not for Max and the team.

Max and the rest of the crew are quickly thrown into the middle of a string of vicious unconnected murders. With all the deaths appearing to be at the hands of various magical creatures and beings, it seems to be a clear open and shut case. Or is it…?

Will the team figure out what is going on before the regular government intervenes? Again most importantly, will Max and Kim find time for a drink or two at their favorite bar, the Fallen Angel?

★★★★★ “Justin is quickly becoming a force to be reckoned with in the UF market.” Hunter Blain-Okayest Selling Author of the Preternatural Chronicles.

★★★★★ “Makes other books of this type seem simplistic, WOW.” David

★★★★★ “Just Wow. More thought out than most other UF offerings out there.” James